Soup for a holiday? A strange idea. But no! A hot plate of soup at Christmas is a long tradition in many countries around the world. This is a wonderful dish for a winter family meal - warming, hearty, generous. And it really unites everyone at the table.

A plate of hot soup for Christmas will be most welcome where winter is harsh or chilly. For example, in Finland, where creamy fish soup lohikeitto is traditionally prepared - a pound of salmon, one and a half kilograms of potatoes, leeks, dill and 30% cream - this is the basic set of hot meals that the Finns eat all winter, and holidays are no exception. There is a very similar recipe in Spain - porrusalda con bacalao. Only, as the name implies, cod plays the main role in it and white wine is added to the soup - for a brighter taste and a festive mood.

In the country of snow-capped mountains - Switzerland - winter holidays are unthinkable without fondue. In the winter season, this dish with melted cheese is the main hit of the local cuisine, and both tourists and natives alike eagerly eat it. But for Christmas in Switzerland, they prepare a special fondue, which can be considered a kind of soup - chinoise fondue, or fondue in Chinese. To begin with, a strong beef broth is cooked, into which garlic, lavrushka, cloves and, if desired, sprigs of rosemary and thyme are to be thrown. The aromatic brew boils for about an hour, after which a generous portion of cognac is poured into the broth and served on the table, and bowls with thinly sliced ​​raw meat and blanched vegetables - broccoli, carrots, asparagus are placed next to it. Everyone sits around the pot and dipped pieces of meat and vegetables in hot broth - a minute, and you're done, you can dip your piece in the sauce and put it in your mouth. Typically, tartare and curry are served with this fondue, but you can enhance the Asian accent and dip the meat in soy sauce or sriracha.

In the Land of the Rising Sun, ramen is traditionally eaten. The basic and most popular option is ramen with noodles, pork belly, eggs, soy sprouts, green onions, ginger, but other ingredients are often found in a festive dish. And for the New Year, the Japanese eat a special soup - zoni. It is boiled in fish broth and chicken breasts, potatoes, carrots, shiitake mushrooms and rice wine are added - nothing human is alien to the Japanese either.

The Greeks cannot imagine a Christmas table without a special holiday soup - avgolemono. It is prepared on the basis of beef broth with chicken fillet, eggs, rice and lemon juice. The consistency of avgolemono is somewhat reminiscent of risotto. The thick brew is sprinkled with fresh chopped herbs and begins the Christmas meal with it. By the way, avgolemono is often eaten cold.

In Poland, on the table on the bright holiday of Christmas, there must certainly be borscht with ears - beet broth with mini-donuts.

Borsch is also on the Russian festive menu. Previously, it symbolized victory over evil spirits and was lean - mushroom broth, beets and beet kvass. Another lean soup that should emphasize the strength of faith - cabbage soup - was cooked in mushroom or fish broth. There was no meat in either borscht or cabbage soup. But times are different now. And the richest and most satisfying Russian soup, which is traditionally eaten at Christmas, is cabbage soup with mushrooms and barley porridge. This soup is good even without meat.

This soup owes its name to the dish in which it is traditionally cooked. Petite marmite - translated from French - small bowler hat. However, it doesn't matter in which pot you cook it, it is important that the soup is very rich and that your guests like it. 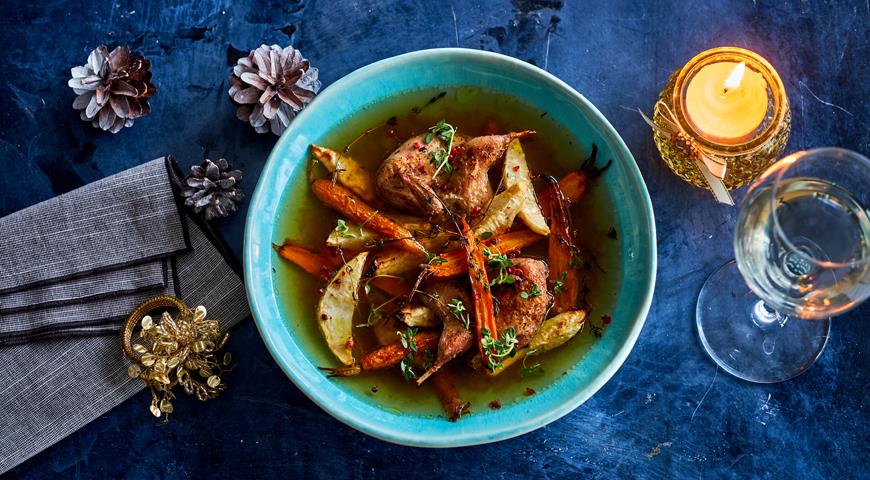 This Italian soup is very similar to our broth dumplings. Very small dumplings in a very aromatic broth - all very tasty. 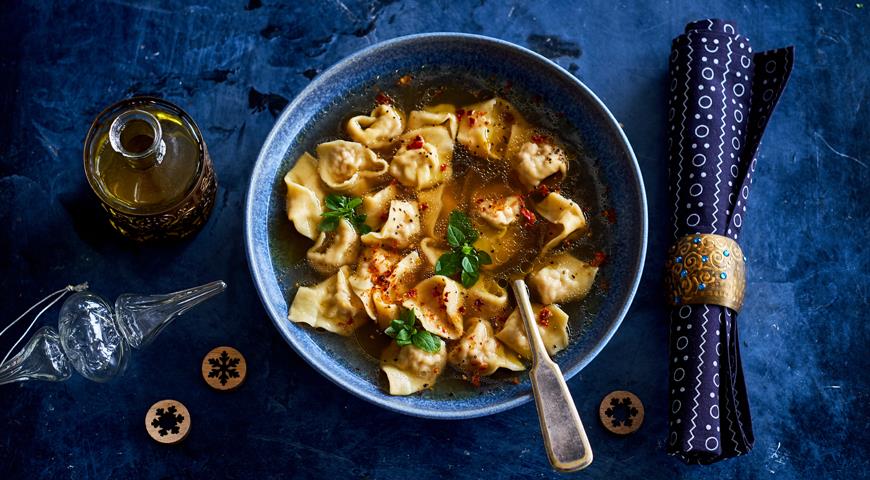 Russian chowder with ham in a pot

Soup in Russia is not just soup: not a single dinner party could do without the first one. Prepare a hearty Russian chowder for Christmas for a festive meal. 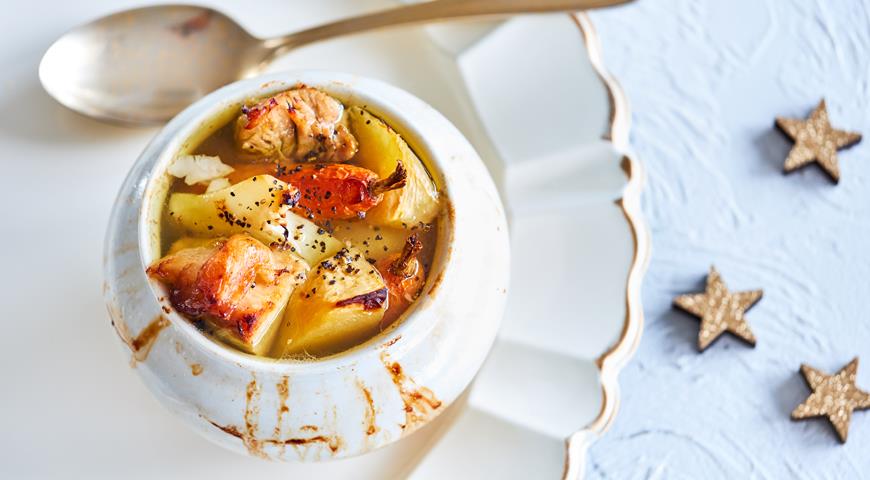 Light, delicate, fragrant lentil soup will warm you in cold weather and give you a festive mood - it is also very beautiful. 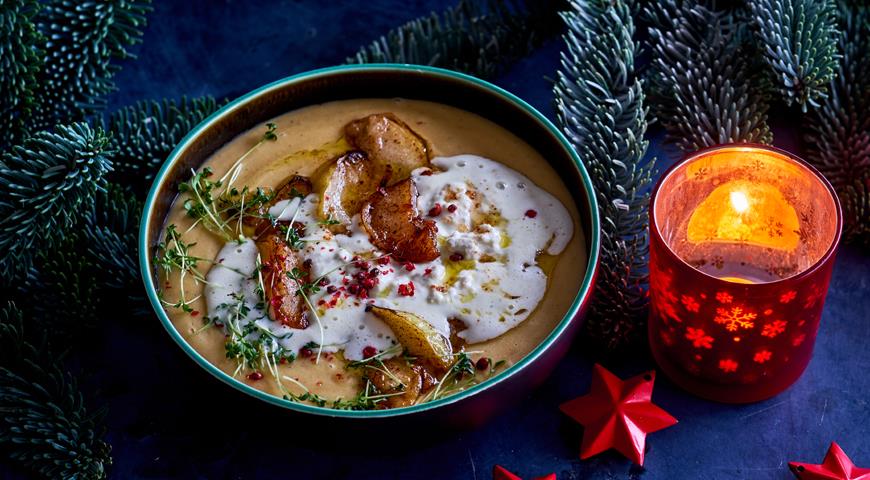 Rich and very satisfying, chowder is perhaps the main American soup. At least for homemade American food. A great option for celebrating Christmas with a family. 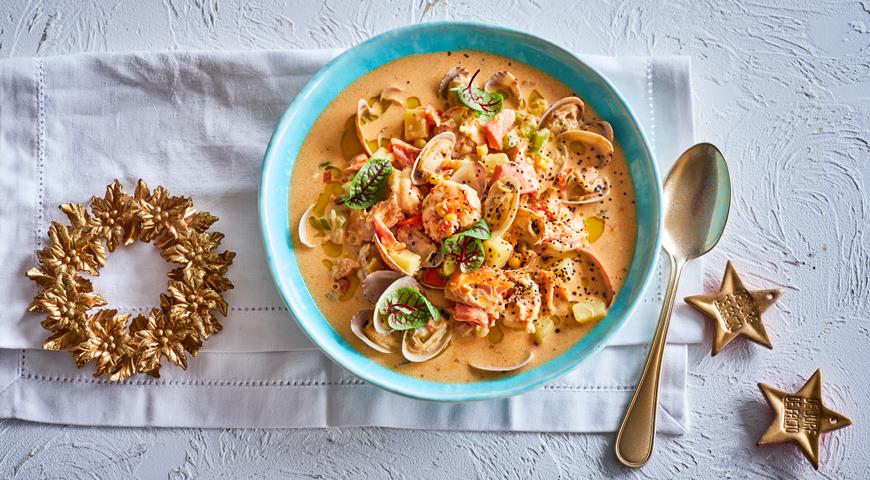