All the dishes that Brad Pitt ate in the movies

December 18 is the birthday of handsome Brad Pitt. We are sure that the actor's festive table will have a lot of tasty things, because he is constantly chewing something in almost all the films in which he starred. They say that this even directly affects the success of the picture. Let's get acquainted with the favorite dishes of Brad Pitt's characters.

Brad Pitt has a special relationship with food - the actor is sure to eat something in all the iconic films in which he starred. Sometimes it even seems that Pitt is the most gastronomic feature film actor. In some tapes, frequent snacks on the run are part of his character's image.

So, in Ocean's Eleven, his character is so busy that he just has no time to sit down and eat quietly. So you have to constantly intercept something on the run. But why does Brad necessarily chew something in other pictures? Why the directors or the actor himself need this is not exactly known. Someone thinks that in this way Pitt wants to look cooler or, on the contrary, tries to be more democratic, "his boyfriend" who loves the same food as millions of his fans. There is even a theory that the more an actor ate in a film, the more success he will enjoy with viewers and film critics.

In films, Brad Pitt is quite omnivorous, he can order takeaway food, crunch harmful popcorn, and gnaw an apple. In three films, Pitt chews gum, and in one he sucks on lollipop. His heroes are not noticed in addictions to healthy eating, and they are not special gourmets either. They eat mainly dishes that most people prefer in everyday life. Except perhaps for the prison gruel ("Seven Years in Tibet") and human blood ("Interview with the Vampire"). 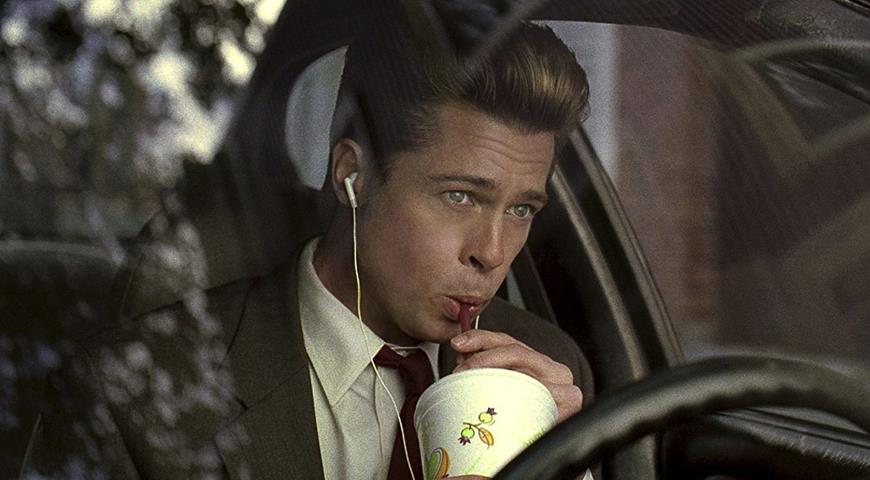 Pitt's heroes do not drink very much, except for all the same blood - a cocktail in Ocean's Eleven and a milk cocktail in the Coen brothers' film Burn After Reading. In Quentin Tarantino's new film "Once Upon a Time in Hollywood", Brad dares to "Bloody Mary" and appetizingly nibbles it on stalked celery.

And now specifically about the dishes that the characters of the famous actor absorb.

You need to start your day with a good breakfast. Early in the morning, Brad Pitt eats bacon and barley (Meet Joe Black), oatmeal, pancakes (Mr. & Mrs. Smith) and a donut and jam (Johnny Suede). 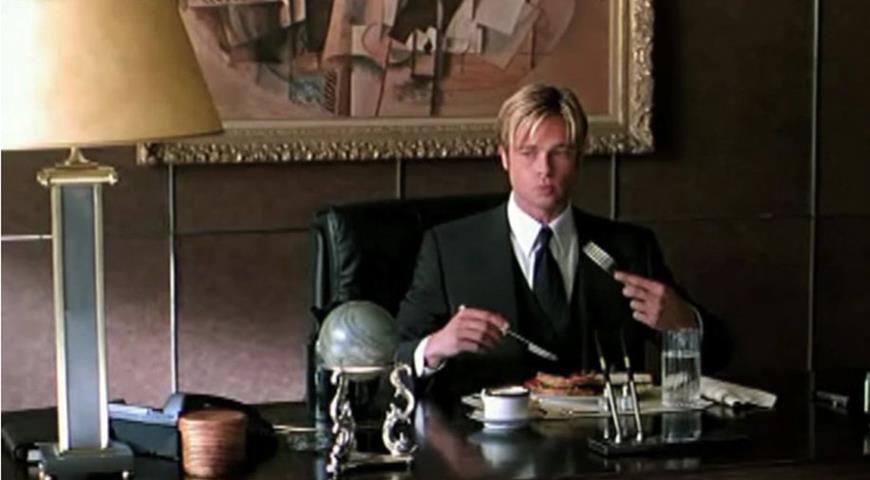 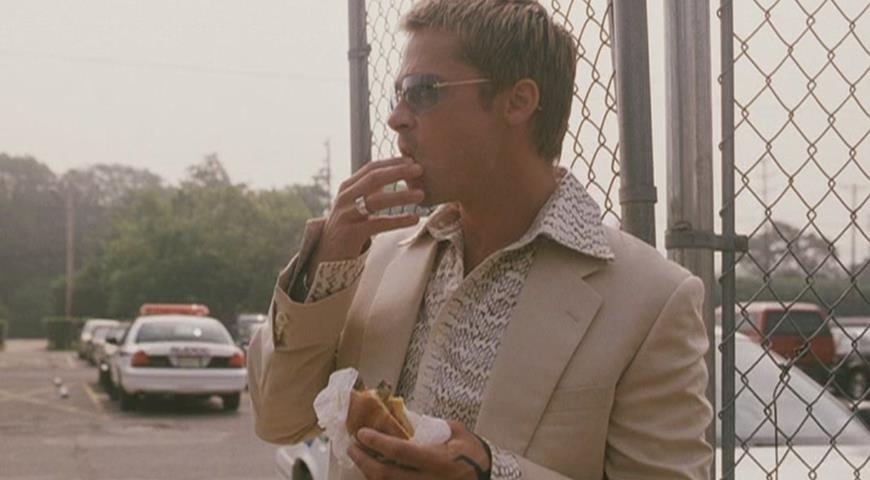 Here is the real expanse - nachos ("Ocean's Eleven") and udon noodles ("Burn after reading"), sandwiches with ham and cheese, with turkey and something unidentified ("Where the river flows", "Meet Joe Black "," The property of the devil "), nuts (" Ocean's Eleven ") and seeds (" The Man Who Changed Everything "), corn chips (" Ocean's Twelve ") and a bagel (" Mr. and Mrs. Smith "), toast ( Meet Joe Black) and tortilla (Seven Years in Tibet), baguette (Inglourious Basterds) and biscuits (The Man Who Changed Everything, Meet Joe Black).

Well, where is without her in America !? French fries ("The Man Who Changed Everything"), popcorn ("The Mysterious Story of Benjamin Button"), cotton candy ("Ocean's Eleven") - it's impossible to refuse. And for a jar of peanut butter, you can even negotiate with Death ("Meet Joe Black"). 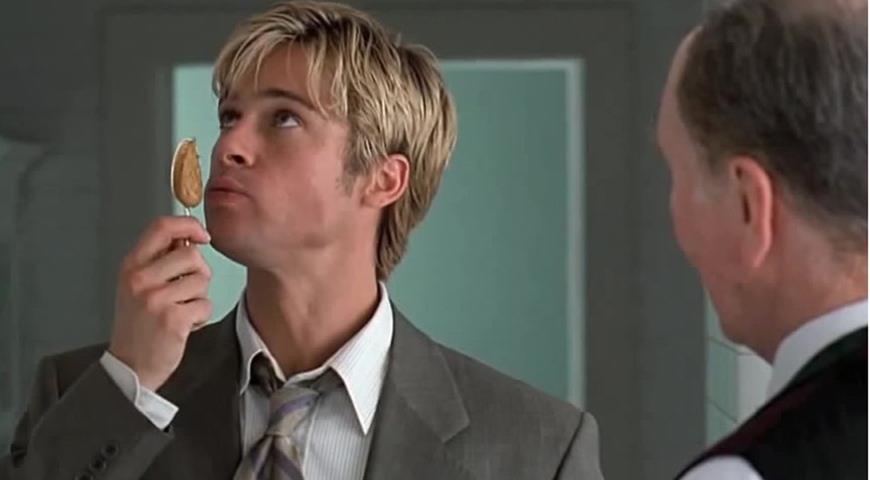 And there is a hole in the old woman. So Brad Pitt sometimes unexpectedly gnaws raw and boiled carrots ("Johnny Suede", "Meet Joe Black"), apples ("Fight Club") and peaches ("Mr. and Mrs. Smith"), eats olives ("Mr. and Mrs. Smith ") and Greek salad (" Troy "), as well as caviar (" The Curious Story of Benjamin Button ").

Guess what Brad Pitt tried new in Quentin Tarantino's latest Once Upon a Time in Hollywood? Unexpected move is dog food! At first, Pitt simply feeds the dog, and then decides to expand his own culinary horizons. Indeed, experience is the son of difficult mistakes. 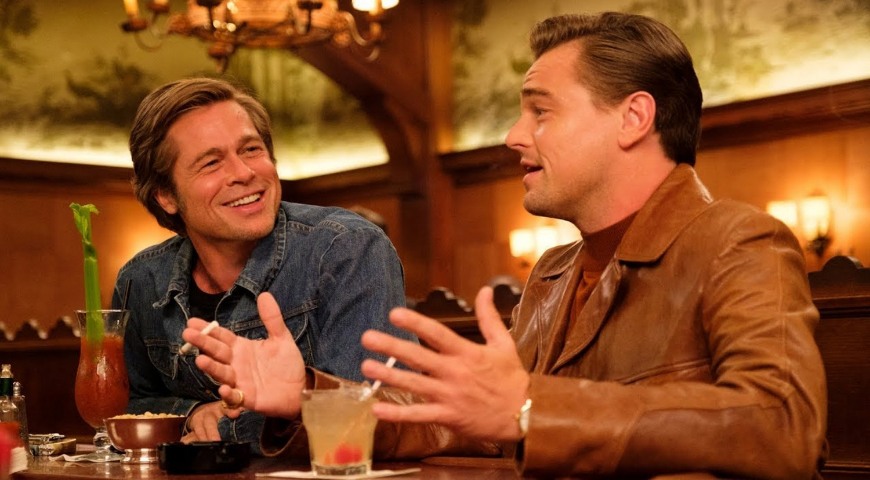